I don't often blog about things that are trivial or what I assume to be trivial, so bare with me. For those of you who know me or who follow me on Facebook or who read my blog often, you'll know that I have a dog called Daisy. You'll also know how much she means to me. I'm gaga about her. As a child, I always wanted a dog but wasn't allowed one so when I got Daisy three years ago, I was over the moon. She is in no way a spoilt brat. She behaves like one of my daughters yet at the same time, she behaves like she is their nanny. However, there are times when she can go wappy. She's not terribly keen on other dogs as she was attacked by five dogs when she was a puppy. She is also terribly protective of us. I've always kept her on a lead whilst walking her as I was never sure of how she would react towards other dogs. However, recently, her behaviour has improved so much and I've been confident enough to let her off the lead.... until today. I took Daisy and my friend's dog Layla out for a walk today. All was well. We'd almost got to the end of the park when we saw a couple with their dog. Layla and Daisy ran towards the other dog and Daisy started sniffing her and then she started growling and the owner of that dog kicked Daisy and before I could grab her, Daisy went to the dog again and started growling and the owner started kicking her again and well, it all kicked off. The wife started shouting and tried to grab Daisy and Daisy supposedly bit her. I managed to grab hold of Daisy who had calmed down by then. The owners of the dog then started getting verbally abusive towards me. It was really upsetting. I know if it was the other way round, I would have been just as upset as them and I feel like I've really let myself and my dog down. It was something I just wasn't expecting from her. However, I think I've learnt the hard way and so has Daisy. She will now always be on a lead. As much as I love to let her run in the big fields at the park, I think the safety of other dogs and Daisy's safety is paramount. I know she will never hurt anyone but sometimes the actions of other people might trigger a side to her that I have never seen. Needless to say, I'm pretty upset and I'll probably avoid the park for awhile. It's been a tough two months for me with my daughter Jill on holidays and constantly having someone talking to me, I think I haven't been thinking straight. A lesson learnt. If the owners of that 15 year old dog read this, I humbly apologise. However, please spare a thought for someone else's dog before you kick it, hurt it and aggravate it and spare a thought for the owner who felt just as traumatised. 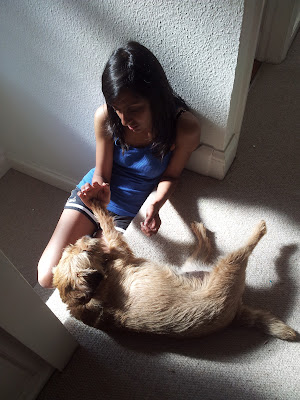 Posted by Kiran Ravilious at 8:14 PM

All Designs, Photographs and Images are Copyright © of Kiran Ravilious